As I was looking at this chart again (from HERE), something struck me. 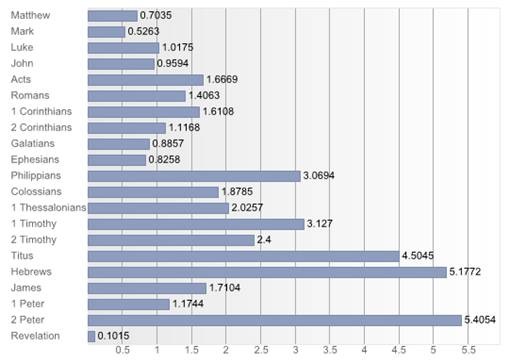 The two highest ranked books in terms of how many instances of Modifier XP Noun (Y1) hyperbaton are also opposite of each other in terms of literary ability. Hebrew is generally recognized as the most well-written Greek in the New Testament, while 2 Peter, well, isn’t. Robertson writes,

It is worth mentioning that 2 Peter and the Apocalypse, which are the two books that furnish most of the linguistic anomalies in the N. T., both have abundant parallels among the less well-educated papyri writers, and it is of Peter and John that the terms ἀγράμματοι and ἰδιῶται are used (Ac. 4:13).

Von Soden﻿﻿ considers that in the N. T. Hebrews is “the best Greek, scarcely different in any point from that of contemporary writers.”

Yet in terms of discontinuous phrases, 2 Peter and Hebrews are nearly parallel. I’m not sure what this means. I’m not even sure if this is a remotely valid use of statistics, though it is interesting. If the graph can be taken at face value, then Y1 Hyperbaton should probably not be considered a Atticism. My tentative opinion is that is to do with the purpose of the book. If Y1 Hyperbaton evokes and negates a set of alternatives by singling out a particular modifier, then it would likely occur in polemic texts, Hebrews and 2 Peter fit that description rather well.

I need to examine the occurrences in Titus. Maybe later today or tomorrow.