As commentaries on Ephesians go, I generally find myself regularly going back to John Chrysostom and his homilies on Ephesians. The fact that he is a native speaker of the language within a few hundred years of Paul makes his comments rather valuable. There are, of course, a couple caveats with that. For one, while the Greek language has changed surprisingly little, those three hundred years between Paul and John are still three hundred years. That’s plenty of time for things to change. And also, we must make a distinction between John Chrysostom’s opinions about what Paul meant and his intuitions about the Greek language. The latter are significantly more valuable to us because they say something about how a native speaker would have understood Paul. The former are significant in showing what was ambiguous to discern by Greek speakers. There is a gap between what we as native English speakers think is ambiguous and what the native Greek speaker would think is ambiguous.

The biggest challenge then is determining exactly which is which, since Chrysostom’s Homilies on Ephesians do not tend to provide multiple options for the meaning of the text very often. Here are a few rules of thumb:

But even with these, I would still advise caution.

Then there’s the challenge that John Chrysostom wrote in Greek and that the only complete translation of his homilies on Ephesians are themselves more than 150 years old. The translation is both awkward and unnecessarily literal – almost to the point of being unintelligible at times. Now I read Chrysostom in Greek simply for immersion purposes, but often times, I want to read what he’s saying in English so that I can follow it better. I recently figured out a way to do that using Logos Bible Software’s Sermon File Addin so that I can make my own translation.

After editing the line numbers from the TLG texts from http://www.documentacatholicaomnia.eu/ out of the PDF, I copy and pasted the text into the sermon file addin, set the language to Greek, did some more paragraph editing and hit compile. 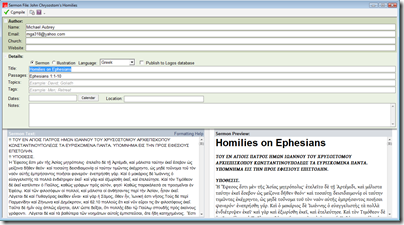 Now its a separate searchable resource in Logos.

They may not be tagged morphologically, but that really doesn’t matter because Logos allows linking directly to Perseus Online either through the right click menu or by a double click: 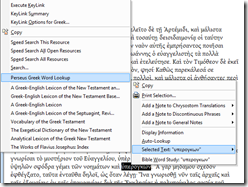 If the given word is already a lexical head word in a dictionary, I’ll be taken directly to it first though, which is more convenient anyway.

This way, I’ll be able to survive until the Patrologia Cursus Completus, Series Graeca is available.

*I am not differentiating here between grammar and lexicon. I’m cynical about how great a distinction one can draw between those two. Both are acquired at the same time by a speaker in parallel to each other.