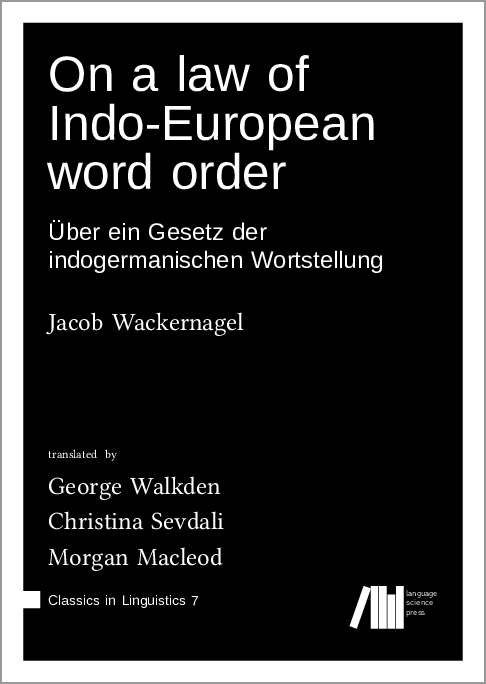 On a law of Indo-European word order by Jacob Wackernagel

We try to stay on top of recent publications in Ancient Greek linguistics and share them with our readers on a semi-regular basis. The books below represent some that stood out to us. If there are others from late 2020 and early 2021 that we’ve missed, drop a note in the comments.

Of course, there’s also the new Cambridge Greek Lexicon, but we highlighted that separately last week.

This collective volume contains thirty six original studies on various aspects of Ancient Greek language, linguistics and philology written by an international group of leading authorities in the field.

The essays are organized in five thematic groups covering a wide variety of issues of ancient Greek linguistics, ranging from epigraphy and the study of individual dialects to various other aspects of the structure of the language, such as phonetics and phonology, morphology, lexicon and word formation, etymology, metrics as well as many syntactic matters and problems of pragmatics and stylistics of the language; a number of essays move in the middle ground where language, linguistics and philology crosscut and cross-fertilize each other with the application of linguistic theory to the study of classical texts.

The Vaticanus Bible: Gospels was the first volume of such (pseudo‑)facsimile Bibles. The Vaticanus Bible: Acts and Epistles marks the second volume to complete the extant New Testament from Codex Vaticanus. One who is familiar with Codex Vaticanus will find that the present volume exhibits three primary modifications and/or differences from the original: First, the original codex contains three columns per page. In The Vaticanus Bible, each original page has been split into three so that only one column appears per page. Second, chapter and verse numbers have been added in the outer margin of each page; they do not intervene in the text. Third, and finally, the present volume is based on a pseudofacsimile rather than an actual facsimile. Nevertheless, the pseudofacsimile provides an excellent representation of Codex Vaticanus. In fact, the pseudofacsimile is even more authentic than Codex Vaticanus with respect to the absence of accents/diacritics, which were added by a later hand and not in the original fourth-century manuscript.

This volume on Greek synchronic etymology offers a set of papers evidencing the cultural significance of etymological commitment in ancient and medieval literature. The four sections illustrate the variety of approaches of the same object, which for Greek writers was much more than a technical way of studying language. Contributions focus on the functions of etymology as they were intended by the authors according to their own aims. (1) Philosophical issues addresses the theory of etymology and its explanatory power, especially in Plato and in Neoplatonism. (2) Linguistic issues discusses various etymologizing techniques and the status of etymology, which was criticized and openly rejected by some authors. (3) Poetical practices of etymology investigates the ubiquitous presence of etymological reflections in learned poetry, whatever the genre, didactic, aetiological or epic. (4) Etymology and word-plays addresses the vexed question of the limit between a mere pun and a real etymological explanation, which is more than once difficult to establish. The wide range of genres and authors and the interplay between theoretical reflection and applied practice shows clearly the importance of etymology in Greek thought.

Linguistic varieties such as female speech, foreigner talk, and colloquial language have not gone unnoticed when it comes to Classical Greek, but little is known about later periods of the Greek language. In this collective volume leading experts in the field outline some of the most important varieties of Post-classical and Byzantine Greek, basing themselves on a broad range of literary and documentary sources, and advancing a number of innovative methodologies. Close attention is paid to the linguistic features that characterize these varieties, with in-depth discussions of lexical, morpho-syntactic, orthographic, and metrical variation, as well as the interrelationship between these different types of variation. The volume thus offers valuable insights into the nature of Post-classical and Byzantine Greek, laying the foundation for future studies of linguistic variation in these later stages of the language, while at the same time providing a point of comparison for Classical Greek scholarship

This book is the first in its field. It showcases current and emerging communicative practices in the teaching and learning of ancient languages (Latin and Greek) across contemporary education in the US, the UK, South America and continental Europe. In all these parts of the globe, communicative approaches are increasingly being accepted as showing benefits for learners in school, university and college classrooms, as well as at specialist conferences which allow for total immersion in an ancient language. These approaches are characterised by interaction with others using the ancient language. They may include various means and modalities such as face-to-face conversations and written communication. The ultimate aim is to optimise the facility to read such languages with comprehension and engagement.

The examples showcased in this volume provide readers with a vital survey of the most current issues in communicative language teaching, helping them to explore and consider adoption of a wider range of pedagogical practices, and encouraging them to develop tools to promote engagement and retention of a wider variety of students than currently find ancient languages accessible. Both new and experienced teachers and learners can build on the experiences and ideas in this volume to explore the value of these approaches in their own classrooms.

Nowhere are the chaotic debates surrounding contemporary aspect theory more heated than in discussions of the theory’s application to Hellenistic Greek, and especially its understanding of the semantics of the Greek perfect tense. This book is a distilled academic debate among three of the best-known scholars on the subject, each defending his own unique interpretation while engaging the other two. The Perfect Storm will prove an indispensable resource for any scholar seeking to write convincingly on the Greek perfect in the future.

The Interpersonal Metafunction in 1 Corinthians 1–4: The Tenor of Toughness by James Dvorak

In The Interpersonal Metafunction in 1 Corinthians 1-4, James D. Dvorak offers a linguistic-critical discourse analysis of 1 Cor 1-4 utilizing Appraisal Theory, a model rooted in the modern sociolinguistic paradigm known as Systemic-Functional Linguistics. This work is concerned primarily with the interpersonal meanings encoded in the text and how they pertain to the act of resocialization. Dvorak pays particular attention to the linguistics of appraisal in Paul’s language to determine the values with which Paul expects believers in Christ to align. This book will be of great value to biblical scholars and students with interests in biblical Greek, functional linguistics, appraisal theory, hermeneutics, exegesis, and 1 Corinthians.

James D. Dvorak, Ph.D. (2012), McMaster Divinity College, is Professor of Greek and New Testament at Oklahoma Christian University. He has published a number of edited volumes, including The Epistle of James: Linguistic Exegesis of an Early Christian Letter (MDC Press/Pickwick, 2019).

Jacob Wackernagel’s 1892 essay on second-position enclitics in the Indo-European languages has long been hailed as groundbreaking in both historical and theoretical linguistics. Until now, however, it has only been available in the original German. This book provides a full translation into English, including glossed and translated examples from several early Indo-European languages and varieties and full bibliographical details of the references drawn upon, as well as a new edition of the German original. It should be of interest to researchers in historical and Indo-European linguistics and in general linguistics working on the interfaces between morphology, prosody and syntax. Because LangSci Press is an open publisher, this book is also freely available as a PDF on their website: On a law of Indo-European word order.

Jacob Wackernagel (1853–1938) was a linguist and Indo-Europeanist who taught and researched for most of his life at the University of Basel. He is best known for his grammar of Sanskrit, his lectures on syntax, Wackernagel’s Law, and diverse contributions to historical Greek and Indo-European philology.

George Walkden is Professor of English Linguistics and General Linguistics at the University of Konstanz. He works on language change and syntax, particularly in the context of the Germanic languages.

Christina Sevdali is a senior lecturer in linguistics at Ulster University. Her research focuses in Ancient Greek from a generative perspective. She has worked on infinitives, case and ditransitives.

Morgan Macleod is a research associate at Ulster University, working in historical linguistics. He has applied quantitative and corpus-based methodologies to topics in a range of languages including Old English and Ancient Greek.