This is part one of a multi-part series. Part II is: A brief history of syntactic theory: Parallel-contraint based syntax.

What is the structure of a sentence like this? There’s a lot going on here. This clause has a pre-verbal participle, followed by a prepositional phrase that is split in half by the main verb. When we considering existing linguistic analyses, a couple options come forward. On the one hand, there are the discourse features annotated by Stephen Levinsohn and Steve Runge. On the other hand, there are the various treebanks for the New Testament that have been created over the past decade. Both types are modeling particular things about the grammar of the language

What then is the configuring
mechanism for syntactic structure?

This is sort of an ongoing challenge for people working on modeling syntax. It actually goes back several decades now. Before we can talk about possible solutions, let us examine some of the history behind syntactic representations.

A good place to start with syntax trees is probably with Chomsky. There’s no need to get into the more complicated details of movement, transformations, and the like. For our immediate purposes, we just need the surface structure and their trees. The trees of this era in the 1960s were as much about defining grammatical relations (subjects, objects, etc.) as they were about actual phrase structure. 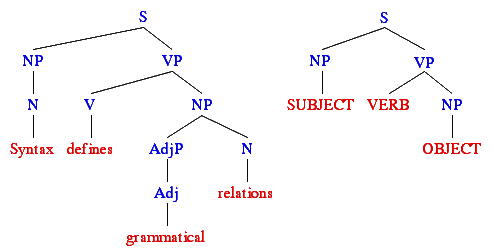 Rules like the three above were envisioned not as only explaining the basic hierarchy of English syntax, but also providing explanatory power to subjects and objects. Rather than a subject being a syntactic privative, the syntactic rules that create the tree provided derivational basis for the relations themselves. Grammatical relations, then, for Chomskyan theory only exist as locations in a tree and nothing more. It has an elegance to it that even today is quite beautiful. And you can see why movement rules become necessary here. Once you have the structure, the sense that something has moved when you encounter structures like passives or relative clauses suddenly feels like quite a natural explanation.

Basic phrase structure trees give an explanation for something in English that previously did not have one: where do grammatical relations come from?

The consistent answer for the past few decades or so has been information flow.

Common labels for helping organize information flow descriptively include words like topic and focus. The former often gets discussed in terms of aboutness or old/given information both of these convey fact that in some way there is an element in a sentence that the speaker can rely on their audience already recognizing: ‘this is what this sentence is about,’ ‘you already know this part and it is important for the piece of information I want to share with you.’ The latter label, focus likely evokes in the mind things like prominence or emphasis and there is a sense in which that is not far off, but its more important entailments in the study of information flow pertain to newness and assertion. These two words should call to mind the other side of the coin in communication: making assertions (new information) about things the audience already knows (old information).

So in the study of information flow, the bare minimum of categories necessary are:

And back to syntax…

Since the splitting of various linguists away from Chomsky over the years, accounting for information flow has varied substantially from theory to theory.

Mainstream generative theory is a carpenter with a hammer and all of language is treated like a nail.

The mainstream generative linguists have worked to squeeze information flow into their existing models by adding more layers to the trees. Now there’s a Topic Phrase, a Focus Phrase, and any number of other elements all sort of jury-rigged into the tree.

Looking at a tree such as this one, there is likely to be a sense that some of the original elegance of the framework has been lost in the intervening years. This is not a particularly attractive solution to the challenge problem of languages that differ from English. Now, the intention of this approach is certainly clear. It operates analogically to Chomsky’s original proposal for grammatical relations. If subjects and objects are configured into the hierarchy of the syntax tree, perhaps information flow concepts are also configured in syntax similarly. Yet there’s a sense in which mainstream generative theory is a carpenter with a hammer and all of syntax has become a nail.

But this is not the only approach to account for information flow’s relationship to syntax.