Today is a day that I have been waiting for quite some time:

Over the past few months, Logos has been kind enough to allow me to participate in the private beta testing of their (formerly) forthcoming version of their library system.

And let me tell you, it has been exciting.

The new version changes just about everything. And it’s for the good.

“Home”, “Library”, & “Search” – all of which are rather self-explanatory. And “File” consists have various syntax searches, notes, visual filters, clippings, etc. that you might create as you go along. Under “Guides” we have the ever reliable passage guide, exegetical guide, & word study guide. All of which have received a nice face lift;

Organizing Windows has improved in some incredible ways. For one, it’s now possible to simple drag windows around and they resize to a highlighted area: 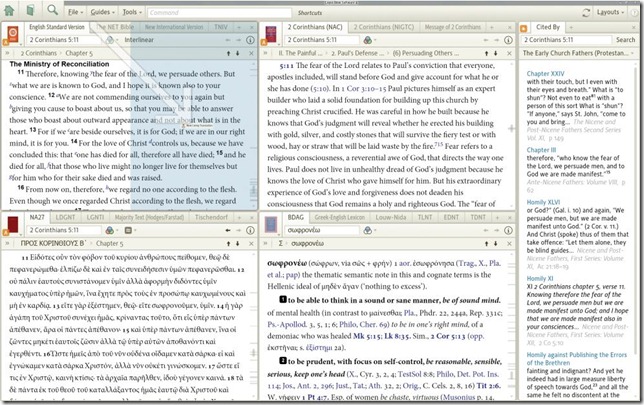 But probably the most exciting thing is the fact that now windows can be separated from the central program window:

Which then results in: 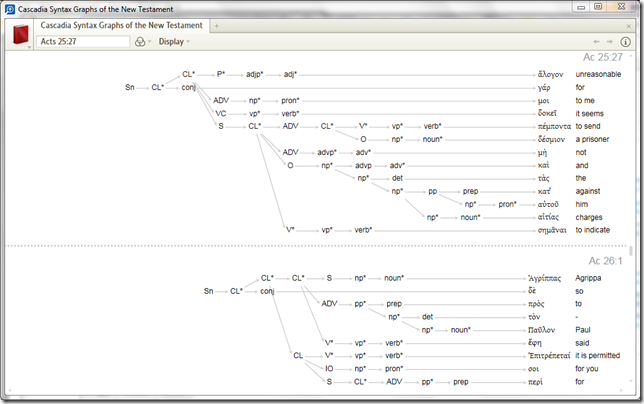 This definitely makes Logos 4 much easier to work with when using multiple programs at the same time compared to Logos 3 – or using multiple monitors (which I would love to have, but don’t).

Finally, had you set up your windows in a certain way a week ago that you want to go back to? Didn’t save it? Can’t remember exactly what it was? Well, Layouts has changed all of that: 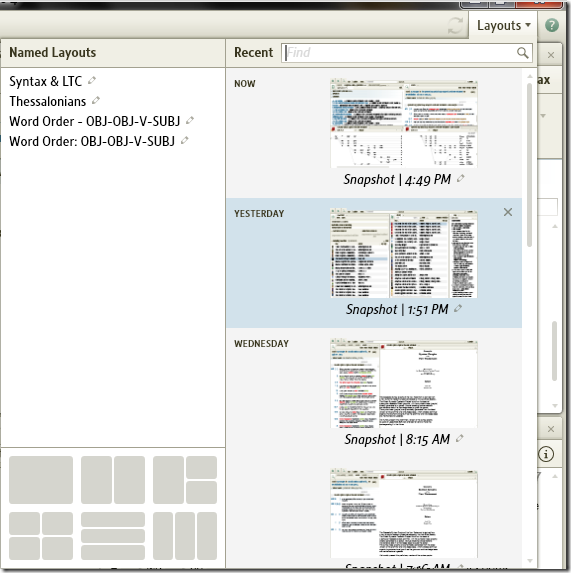 There’s a reason though. Anyway, it is now possible go back and pick out a particular layout that you had used a few days before, rename it, and save it as your own. Currently, I have four such layouts. Why two Layouts with virtually the same name? Well, it’s a long story. 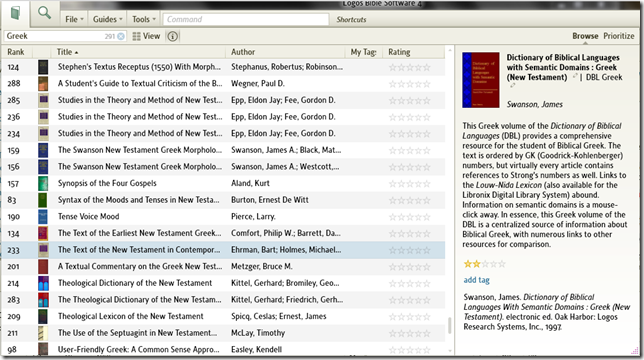 With Version 4, we can now both tag and rate the books in our libraries. Note that haven’t spent too much time ranking books –- Swanson’s dictionary is gets two stars. That’s not because it’s bad, just that it’s not what I would want. It’s a great dictionary for a quick gloss, but I’m very, very rarely interested in a quick gloss. Just want to put a plug in here for the slow, detail reading of lexical entries of full-fledged lexicons like BDAG, LSJ, GELS, & L&N. It gets two stars instead of one because it’s still far superior than Strongs.

Ah, but now we come to the interesting stuff in the library: new resources. Now what follows, as I understand it minimally requires the Original Languages Library, though you will need to go look at Logos’ website to double check on that. And you may have noticed it in a screen shot above: 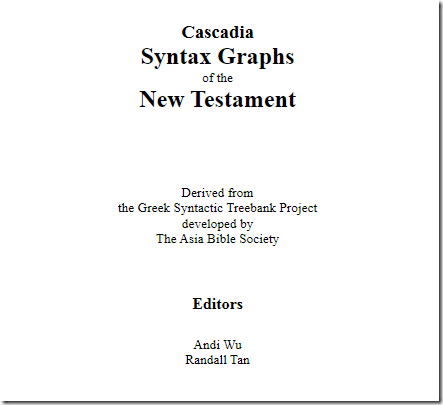 We finally have something to compete with (and absolutely crush!) Opentext.org’s database. These are the same trees that Andi Wu & Randall Tan discussed at International SBL this past year, as well as at BibleTech:2009 (where there’s also a PDF & mp3 available for download).

It’s doesn’t do everything. But it’s a massive leap in the right direction. For one, unlike Opentext.org, Cascadia actually recognizes that there are more than four types of constituents (Predicate, Subject, Complement, & Adjunct). Unfortunately, the treatment of discontinuous phrases is just about the same and needs work. But Cascadia brings a lot to the table: 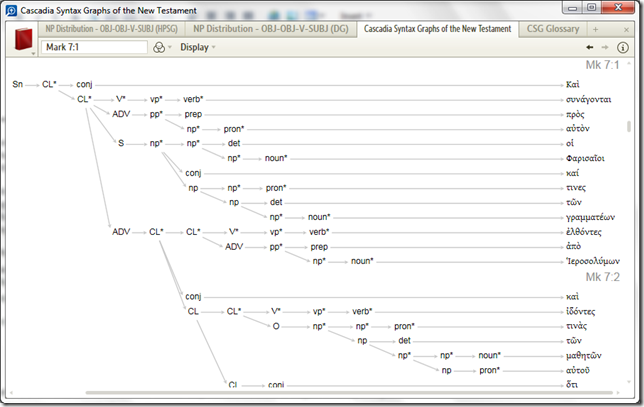 Now I’ve only been able to search using this new database for about a month now, but I definitely like what I have seen, generally speaking. More than anything, I’ve appreciated being able to do the same search using both Cascadia and Opentext.org together and compare the search results.

For example, ditransitive clauses have had my curiosity off and on for some time now, so I constructed this search in Cascadia using the new and improved Syntax Search Dialog (It’s similar to the old one, but now you can drag and drop, which makes it easier to use and is so cool): 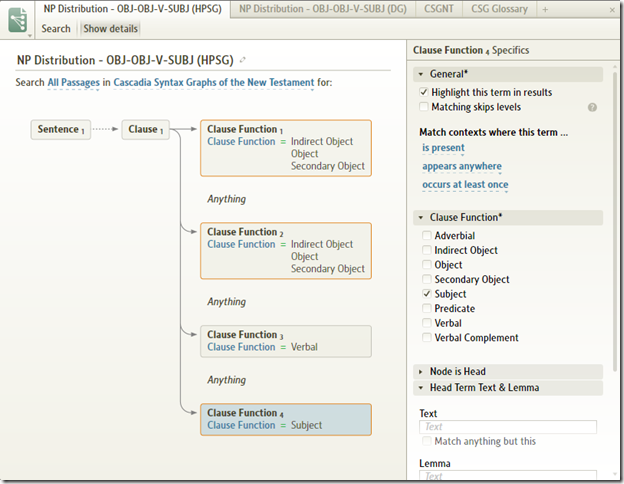 And essentially the same search in Opentext.org:

The results were rather interesting. Opentext received more hits:

The first two in Matthew aren’t ditransitive in Cascadia because they both use copulas. Thus, it is the initial adjective that receives the Predicate Function rather than the verb. An adjective cannot be an Object if it is the semantic predicate of the clause.

Acts 2:39 is not ditransitive in Cascadia because Opentext.org has incorrectly annotated ἂν as a Complement, which it very much is not. And Acts 25:27 has the rather semantically empty, δοκέω, and thus the semantic predicate of the clause is ἄλογον.

Finally, 2 Corinthians 9:1 is not ditransitive in Cascadia, again, because the verb of the clause is a copula.

So why did I go through all of this?

Well, for one, we finally have a second voice beside Opentext.org that provides an extremely beneficial balance & check for determining what the syntax of the text actually is. Of the five differences in this search, four of the were the result of Opentext.org’s simplicity (which, granted, at times is a good thing). But this search also revealed a tagging mistake in Opentext as well. Doing quality research is always going to be dependent upon the quality of the data we use. And now we have a significantly easier way to confirming what is the accurate syntactic annotation.

There is more to do in Greek syntax, of course, but I’ll leave that for another time. I’m planning on putting in another proposal to BibleTech:2010 on this very topic.

I’ll leave you with this: the preface from the Cascadia graphs, just to give you an idea of where they came from:

The Cascadia Syntax Graphs of the New Testament is derived from a new dynamic treebank project developed by the Asia Bible Society. The Greek Syntactic Treebank Project is built on the basis of a computer-readable Greek grammar, with the syntactic trees (graphs) directly generated by a parser. Manual checking and corrections are stored as data in a knowledge base to guide the parser. The syntax trees (graphs) are dynamically generated from the latest version of the grammar and knowledge base, which enables continual organic improvement and growth as the grammar and knowledge base are maintained and updated.

We humbly present this preliminary version of the syntax graphs to users of Logos version 4 and look forward to improving and expanding it in the future.

There is much, much more to say, but I hope I’ve at least given you something to whet your appetite for the time being. Logos 4 is good enough that It’ll be replacing Logos 3 for me. Most definitely.

By the way, did I mention that as of version 4, my entire library is now indexed (which times some time, but is definitely worth it) and I can search my 2000 books in mere seconds for anything?

The Mac version of Logos 4 is in Alpha testing as we speak and will be have complete parity with the Windows version. That’s right, Mac users, you haven’t been ignored.

And did I mention at all Logos 4 for iPhone & iPod Touch is part of the deal?

Be sure to head over to LOGOS 4 to get the whole scoop and learn about new notes, clippings, handouts, editable passage, exegetical, & word study guides (or you can now create your own!). There’s so much that I could have shared, but I wanted to focus on the things that matter to me. So go, check it out: LOGOS 4.

Steve Runge’s got a bit too.

Why two Layouts with virtually the same name? Long story.