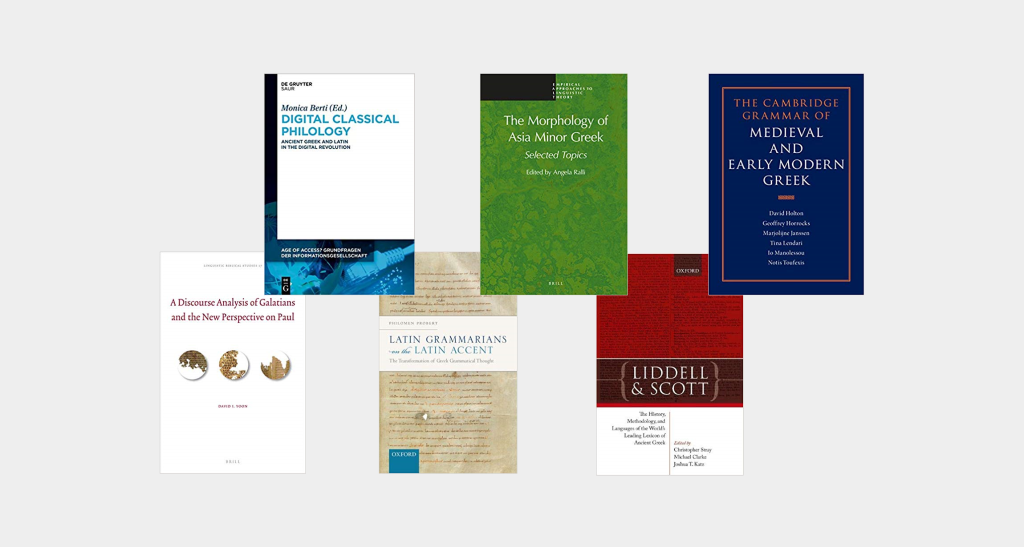 Liddell and Scott: The History, Methodology, and Languages of the World’s Leading Lexicon of Ancient Greek edited by Christopher Stray, Michael Clarke, and Joshua T. Katz

The Greek-English Lexicon of Liddell and Scott is one of the most famous dictionaries in the world, and for the past century-and-a-half has been a constant and indispensable presence in teaching, learning, and research on ancient Greek throughout the English-speaking world and beyond. Despite continuous modification and updating, it is still recognizably a Victorian creation; at the same time, however, it carries undiminished authority both for its account of the Greek language and for its system of organizing and presenting linguistic data.

The present volume brings together essays by twenty-two scholars on all aspects of the history, constitution, and problematics of this extraordinary work, enabling the reader both to understand its complex history and to appreciate it as a monument to the challenges and pitfalls of classical scholarship. The contributors have combined a variety of approaches and methodologies – historical, philological, theoretical – in order to situate the book within the various disciplines to which it is relevant, from semantics, lexicography, and historical linguistics, to literary theory, Victorian studies, and the history of the book. Paying tribute to the Lexicon‘s enormous effect on the evolving theory and practice of lexicography, it also includes a section looking forward to new developments in dictionary-making in the digital age, bringing comprehensively up to date the question of what the future holds for this fascinating and perplexing monument to the challenges of understanding an ancient language.

Latin Grammarians on the Latin Accent: The Transformation of Greek Grammatical Thought by Philomen Probert

Latin Grammarians on the Latin Accent offers a fresh perspective on a long-standing debate about the value of Latin grammarians writing about the Latin accent: should the information they give us be taken seriously, or should much of it be dismissed as copied mindlessly from Greek sources?

Thanks to the digital revolution also a traditional discipline like philology has been enjoying a renaissance within academia and beyond. Decades of work have been producing important results that are developing new research questions and educational resources.

This volume describes the state of the art of digital philology with a focus on ancient Greek and Latin, the Classical languages of Western culture. Contributions address problems like accessibility of information about Greek and Latin sources, data entry, collection and analysis of Classical texts. The book describes the fundamental role of libraries in building digital catalogs and developing machine-readable citation systems of Greek and Latin works. A section is devoted to methods and standards for producing digital critical editions of Classical texts and critical annotations about them. The final part is about morphosyntactic annotation and lexical resources of Greek and Latin with a discussion of topics that pertain to philology and linguistics. The aim of the volume is to describe an emergent field for a new generation of scholars and students, explaining what is reachable and analyzable that was not before in terms of technology and accessibility.

The Greek language has a written history of more than 3,000 years. While the classical, Hellenistic and modern periods of the language are well researched, the intermediate stages are much less well known, but of great interest to those curious to know how a language changes over time. The geographical area where Greek has been spoken stretches from the Aegean Islands to the Black Sea and from Southern Italy and Sicily to the Middle East, largely corresponding to former territories of the Byzantine Empire and its successor states. This Grammar draws on a comprehensive corpus of literary and non-literary texts written in various forms of the vernacular to document the processes of change between the eleventh and eighteenth centuries, processes which can be seen as broadly comparable to the emergence of the Romance languages from Medieval Latin. Regional and dialectal variation in phonology and morphology are treated in detail.

For many years now, a team led by Professor David Holton in the Modern Greek Section of the Faculty of Modern and Medieval Languages has been gathering, analyzing and organizing linguistic data for a new Greek Grammar. Co-directed by Professor Geoff Horrocks (Faculty of Classics), the project is staffed by two full-time research associates, Dr Notis Toufexis and Ms Marjolijne Janssen, and two honorary consultants, Dr Io Manolessou and Dr Tina Lendari, and is funded by the Arts and Humanities Research Council (AHRC).

Greek is one of the world’s oldest recorded languages, with a documented history spanning 34 centuries. Although scholars have analyzed and described the Greek of the Classical, Hellenistic and Roman periods in detail, the linguistic situation is much less studied after the end of Antiquity. At around 1100 AD the beginnings of the modern vernacular first became evident, and over the next 600 years the language underwent significant changes, with the medieval vernacular gradually acquiring the morphological and syntactic features that are characteristic of Greek today.

Fortuitously, 1100–1700 is also a period in which texts in the vernacular are available in sufficient quantities for researchers to observe trends and identify the factors that influence variation. ‘But, despite the increasing availability of this material, there has been no systematic and detailed account of the development of the Greek language during this crucial period,’ said Professor Holton. ‘The Grammar aims to fill a serious gap in the history of Greek. This standard reference work will underpin a growing interest in medieval and early modern Greek literature and its historical, social and cultural context.’

The Grammar spans a geographical area from southern Italy to the Black Sea, encompassing written texts of all kinds, and giving a full account of linguistic developments within this period. It is a high-tech project, using electronic databases and digitized corpora to store and sort a mass of information.

The Morphology of Asia Minor Greek edited by Angela Ralli

This in depth investigation of various morphological phenomena aims to increase our understanding of language change. They result either from a natural evolution of Asia Minor Greek, or from the interaction between the fusional Greek and the agglutinative Turkish or the semi-analytical Romance.

The Morphology of Asia Minor Greek provides an unprecedented collection of data from Asia Minor Greek, namely from Cappadocian, Pharasiot, Silliot, Smyrniot, Aivaliot, Bithynian, Pontic, Propontis Tsakonian and the dialect of Adrianoupolis. It offers fresh and original reflections on the study of morphology, dialectology and language contact by examining issues regarding inflection, derivation and compounding, dealt with by a wide collection of linguists, including:

A Discourse Analysis of Galatians and the New Perspective on Paul by David I. Yoon

In A Discourse Analysis of Galatians and the New Perspective on Paul, David I. Yoon, contributor at Domain Thirty Three, outlines discourse analysis from the framework of Systemic Functional Linguistics for analyzing Paul’s letter to the Galatians. From this analysis, he determines whether the context of situation better reflects the New Perspective on Paul, covenantal nomism, or a more traditional perspective, legalism.