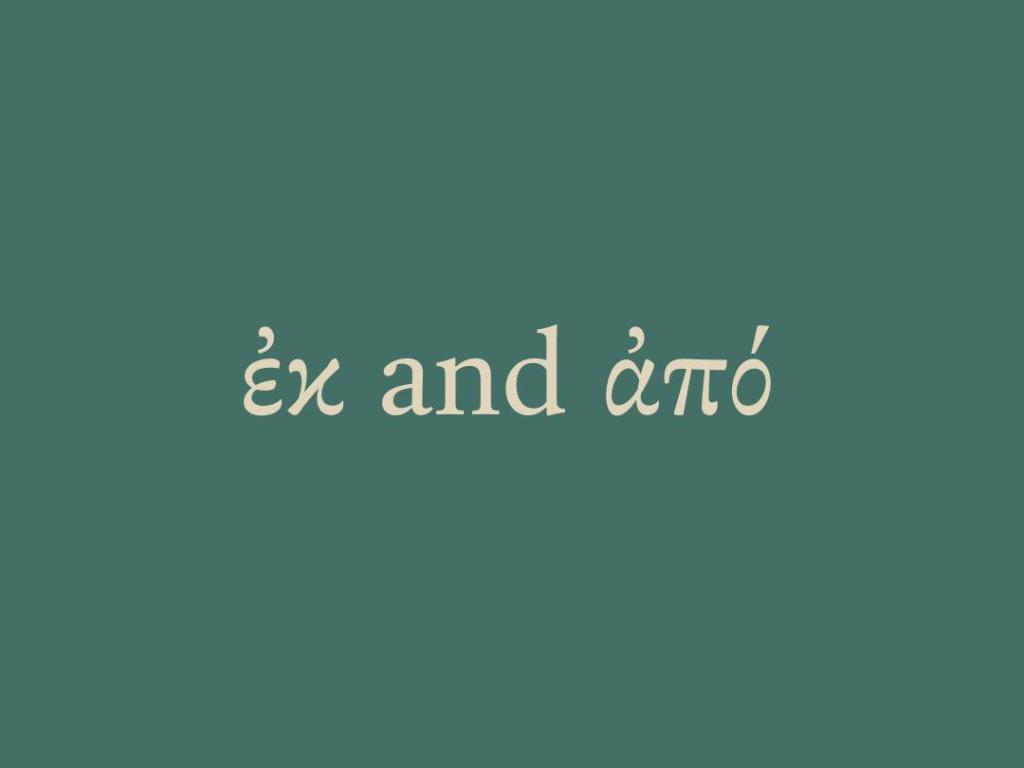 We are continuing our series of notes of usages of ἐκ and ἀπό. SOURCE expressions were first. Then we looked at ORIGIN expressions and then PARTITIVES. Yesterday we’re looking at temporal expressions. Finally today, we have cause expressions with ἐκ and ἀπό. The Greek Prepositions Workshop is next week.

We find a strong “experiential correlation” (Tyler and Evans 2003, 32) between actions and the consequences that result from those actions (i.e. cause and effect): Causes are understood to precede their consequences. If one event immediately precedes another, it is only natural to conceive of the former as the cause and the latter as the effect. The inference is so commonly understood that two causes in a discourse or two scenes in a film may appear one after the other without overt marking of a causative relationship and they are naturally conceived as denoting cause and effect. There are, of course, other ways that cause can be profiled. For example, if an event can be traced back the actions of a person who acts with control or impetus, then it is natural to understand the animate agent as the starting point or origin for the event.

When it comes to cause expressions with ἐκ and ἀπό, an event and its cause are construed as the trajector and its landmark source, respectively. Some cause-effect relationships involve landmarks that are physical objects, as below:

Here the fish are the cause. There is an event is the previous discourse context that causes the net to become so full, but the usage by the author here simply profiles the noun. Causes with physical objects that may be construed with the container schema tend to prefer ἐκ.

The same can be said for physical processes. Fire and smoke, which envelop a trajector take ἐκ in cause expressions, but heat—even heat produced by fire—does not and in turn prefers ἀπό.

Emotion-event causes follow the construal of ἀπό that involves a lack of distinguishability between the trajector and source. When the guards shake with fear, the emotional state that caused the shaking is internal to the affected participant.

Animate causes also prefer ἀπό, as with the two examples below:

There are a few exceptions. If the cause-landmark is expresses high control over the trajector and involves physical contact, then ἐκ will be used.

Both control and contact are profiled in 1 Macc 16:8, where the death of the soldiers is a direct result of physical contact and a high degree of control. Likewise, the use of δίδωμι in John 6:65 activates the image schema for the transference construction where the source (ἐκ τοῦ πατρός) is also profiled as an agent since this is also a passive construction as well. This, in turn, implicates a high degree of control over permission to come to Jesus.