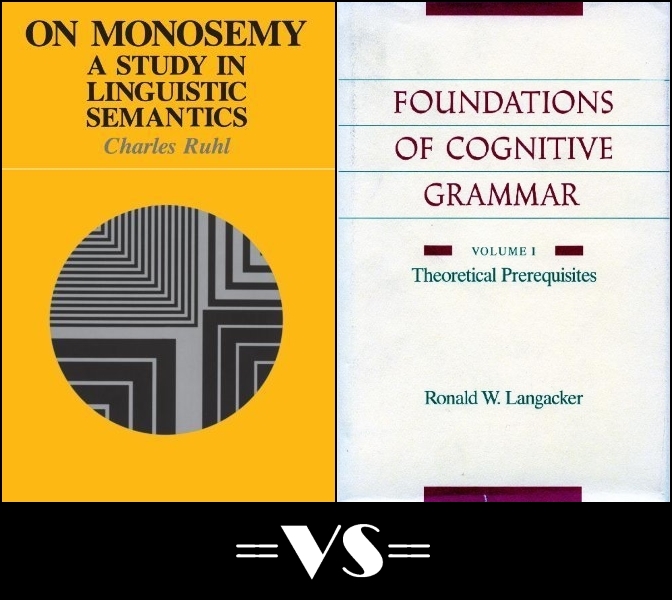 As I continue to prepare my paper on the semantics of compounding, I realized that I had a mostly finished review of Charles Ruhl’s (1989) On monosemy:  A study in linguistic semantics that I had never posted. This will be appearing in (now) six parts over the next two weeks. I’ll provide a full bibliography in the final post, but hyperlinks for each citation appear at first reference. The goal here is to (1) present my thoughts about monosemy as a theoretical construct and (2) maintain a regular posting schedule while I am also devoting more of my time to getting my SBL paper finished on ὑδροποτέω and compounding. This is going to be a deep dive.

I fully acknowledge there is certainly an appeal for monosemy as a theoretical construct. The ability to schematize all usages or senses within a single abstract sense does indeed simplified and elegant semantic theory. Such a theory is an attractive prospect for all linguists. But trouble only grows as the data examined becomes more diverse. Through his detailed examination of real language data for studying the meaning of the verb bear with the preposition out.

But why bear and out? If we need an “abstract sense of movement” (if such is a legitimate notion), why use bear here, rather than run, go, move, which are more obviously motional? Further, off, down, and up (and perhaps other prepositions) have “goal” meanings too, so why is out the choice? These questions are telling; and I have no answers.

One problem with my proposed analysis of meaning is that it is too easy. That is, I have no system to impose constraints. Given enough imagination, I can come up with some way of making the words of a mysterious expression seem motivated.
…
The difficulty in finding an answer does not mean the enterprise is bogus. We can at least sketch the solution of abstract bear out, which is implicit in the “why not something else?” question: we need a full-scale investigation of all the prepositions and verbs. Unfortunately, that is beyond the bounds of this book. One of the difficulties of arguing for monosemy is that a word cannot be treated in isolation; more than in usual theories, my conclusions require conclusions on related words. (49)

This profound expression of honesty as to the limits of Ruhl’s theory deserves respect. Many scholars, regardless of discipline, would not be able to be quite so up front about the lack of explanatory power of their proposals. Still it is worth juxtaposing this expression of honesty with another quote from Ruhl in his discussion of Lakoff (1987) in his preface (xiii-xiv):

Lakoff’s proposal is somewhat like the theory of localism (Anderson (1971)), which derives abstract meanings from prior concrete, localized senses. Both proposals are apparently quite widely supported by details. Yet their plausibility can be explained by a hypothesis that claims precisely the reverse: if in and out (and even contain and container) are highly abstract categories, they could thereby provide the cognitive means for making, and making believable (at various times), the traditional view, localism, and Lakoff’s container schema.

Stated thus, my suggestion seems arbitrary and vague; it is the purpose of this book to make it seem less so. I might note that my claim does not diminish in any way the impressive work done by Lindner, Brugman, and Lakoff; the extended studies at the end of Lakoff’s book are relentless both in their detailed differentiations and in their unifying proposals.

So Ruhl finds Lakoff’s work quite plausible in its argumentation and data, but the effective purpose of Ruhl’s enterprise is to demonstrate the reverse of Lakoff’s claim: instead of local, concrete, and embodied senses motivating highly abstract schematic representations and gestalts, it is instead a highly abstract single sense that “provides the cognitive means for making, and making believable (at various times), the traditional view, localism, and Lakoff’s container schema” (Ruhl 1989, xiii-xiv). But two chapters in, Ruhl already admits that he does not have answers to these questions: “If we need an “abstract sense of movement” (if such is a legitimate notion), why use bear here, rather than run, go, move, which are more obviously motional?” (49). And then he punts to future research that never came.

Indeed, twenty years on, it is telling that Langacker  (2009, 38) makes, effectively, the same observation as justification for why monosemy is simply not tenable.

I can imagine a highly schematic meaning for ring—perhaps some abstract notion of enclosure—that would subsume all the more specific values…. From this alone, however, one could hardly predict that ring would have exactly the set of particular uses that it manifests, to the exclusion of countless others (equally motivated by cognitive and communicative factors) that it lacks. Why should the term be used for arenas and groups of smugglers but not, say, for rubber bands?

Thus a single abstract meaning does not fully describe a lexical item’s established semantic value. Such a meaning should always be sought, and—if found—incorporated in the polysemy network. By itself, though, it fails to represent a speaker’s knowledge of how the expression is conventionally used and understood.

It is a  simple matter to motivate an abstract sense on the basis of a larger polysemic network of language use.  It is another thing entirely to attempt to motivate all of language use from that single abstract monoseme. In Ruhl’s (1989, 49) own words, “These questions are telling; and I have no answers.” And yet, this is precisely Ruhl’s (1989) stated goal according to his own words. And there is yet more irony. With nearly 40 years of research behind it, modern cognitive linguistic approaches to semantics, such as FrameNet (Ruppenhofer et al. 2016), are grounded in robust, corpus-driven, full-scale investigations that Ruhl himself said would be required for proving his nascent theory of monosemy, not to mention their additional corroborating evidence from contemporary neuroscience. But today, their conclusions are the opposite of Ruhl’s: it is the  local, concrete, and embodied senses that motivate highly abstract schematic representations and gestalts, not the other way around.