Mark Janse is a descriptive linguist focusing on Greek dialectology with a particular interests in dialectology, non-standard Greek dialects, and Greek historical linguistics. He is a professor in the Department of Linguistics at Ghent University in Belgium. Anyone interested Ancient Greek should follow his research, even if you’re limited to the Classical period or New Testament Greek. Panchronic and pandialectic approach to language study are only going to become more and more important in the coming years and Janse’s research is a solid example of how to do it right.

This particular paper presents a synchronic and descriptive account of the placement of pronominal clitics in Cappadocian Greek. All of Janse’s data comes from a collection of annotated texts from roughly a hundred years ago. In fact, when Janse wrote his article (1998), it was thought that Cappadocian was extinct. But in 2005 that Mark Janse and Dimitris Papazachariou discovered a community of speakers in Turkey. The community, though very small, is surprisingly healthy.

Cappadocian pronouns are only marked for number, as in table 1.

Cappadocian pronouns “float.” They either attach to the verb or they attach to some element that appears earlier in the clause. Janse argues that in order to understand the distribution of clitic pronouns, we must distinguish between syntactic constraints and discourse constraints.

The default position for Cappadocian clitics is post-verbal. But there are syntactic factors which also appear to be syntactic motivations, according to Janse. Thus the clitics are “pulled forward” by modal and negative particles, subordinating conjunctions, relative pronouns and interrogative words. He provides the following examples.

In (1) we have a clitic appearing pre-verbally following a negation particle, in (2) by a relative pronoun, and in (3) by a interrogative pronoun.

Janse uses the term “echo structures” for some of these. These involve the attachment of the clitic pronoun to a fronted constituent that takes argument focus.[1] The term “echo” comes from the fact that many of these follow from one of Janse’s syntactic constraints above: clauses where the interrogative pronoun attracts the clitic pronoun. This is seen in the following examples:

But Janse emphasizes that this phenomena is only occasional. He provides the following instances of clauses where the focal constituent does not pull the pronoun forward. 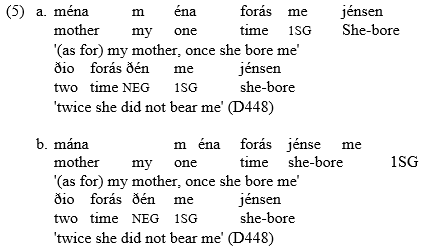 His conclusion is that “clitic float” is a relic of Ancient Greek where preverbal pronouns were “pulled forward” and attached to the categories because of their relationship to sentence stress in conjunction with discourse factors. 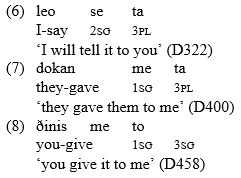 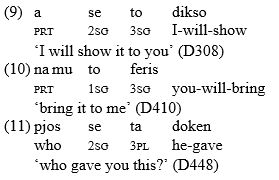 But while this is the general rule, there are exceptions, such as the one in example (12).

Cappadocian Greek, according to Janse (268), allows for a redundant clitic pronoun when there is a strong pronoun pre-verbally. This suggests that the strong pronoun functions in a cleft-like, left dislocated position that then requires a resumptive pronoun to satisfy the requirements of the clause.

Externally, as examples (6-11) also demonstrate, clitics have a preference to attach as a group. Janse notes that in rare instances that clitics can be split:

Janse uses such examples as evidence that templatic approaches to clitic placement do not work well for Cappadocian Greek as compared to other languages.

He concludes with the observation,

“Cappadocian clitic pronouns are far from being morphologicalized. They behave in sometimes very unpredictable ways. Their distribution is determined partly by syntactic, partly by discourse constraints. Multiple clitic pronouns cannot be described in a template framework, since their relative order is not fixe … [and they] do not necessarily cluster together. … [The] Cappadocian clitic pronouns are clitics in the traditional sense: they constitute and category sui generis, somewhere halfway between full words and affixes on the pronoun-to-affix cline” (278).

This is a striking claim, especially in light of the conclusions by Zwicky (1994) on clitics cross-linguistically, that some entities called clitics are actually affixes, whether at the word level or the phrase level and other entities are syntactically and morphologically independent, but phonologically dependent (i.e. bound words) (xix). This last linguistic entity finds an excellent parallel with the pronominal forms described by Janse here.

[1] It appears also that all of these instances of argument focus are also contrastive.