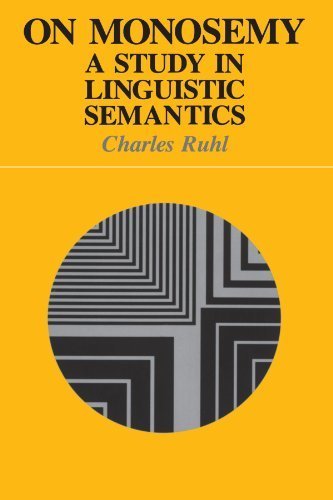 I am assuming a continuous scale of abstraction, from the most abstract, autonomous, mutually (i.e., strongly) systematic, and well-formed level (IDEAL) to the empirical, most concrete, non-autonomous, modularly (i.e., weakly) systematic, and ill-formed level. Roughly, this is the continuum from Language to Reality: from language as a (nearly) autonomous closed system to an experientially open system directly involved in and influenced by externalities. The different levels of abstraction are distinguished, essentially, by their degree of specific context (Ruhl 1989 138-9).

The “strongest” (most abstract and general) solution for such data would seem (other than the obviously wrong syntactic solution) to be the semantic one SSP and Cohen seek, because semantics, being more closed and abstract, imposes more constraints. A pragmatic solution seems an encouragement to “anything goes”; it is looser and vaguer than the systematic semantic features that Cohen so precisely specifies. A pragmatic solution is too easy and exemplifies a common dodge: discarding troublesome data to the relevant “garbage heap” (adverb, idiom, parole, performance) (Ruhl 1989, 147).

Thus, while Ruhl acknowledge of the continuum of language from the highly systematized to the highly idiosyncratic, he only prefers solutions to semantic challenges that appeal to the highly systematized side of the language continuum. Effectively, he claims that the continuum does not actually matter when it comes to seeking answers to linguistic questions because only answers that fits with the generative autonomous paradigm are worthwhile and those who appeal to communicative, functional, or otherwise performance-oriented explanations ought to be viewed with suspicion—they probably fudged their data.

But surely the reverse is equally true. If the only worthwhile explanations are ones that dismiss “pragmatics”, then surely that provides the space to then also dismiss data that does not fit as merely being “performance” or “parole.”

And that is precisely what Ruhl does.